Let's start the conversation!
Get a free no obligation annuity quote.

Talk To A Broker

Schedule a call with Ivon Hughes. A qualified annuity broker can help design an annuity to fit your needs and can instantly provide quotes from all the leading annuity providers.

The Tables below show the monthly incomes for annuity rates based on a premium of $100,000. Income starts in 1 month. 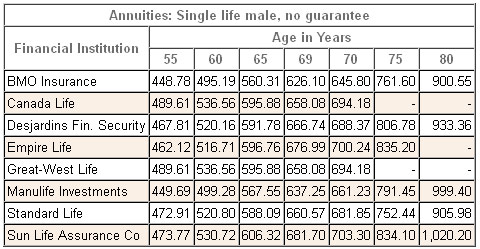 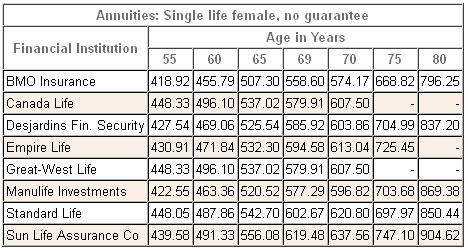 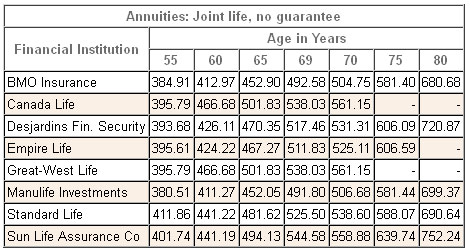 Our outlook for 2014 is really a continuation of our 2013 comments because there have been few changes in the outlook for this year and even 2015.

As I said last year, annuity rates in Canada are affected by local and international economic trends.

On the horizon there seem to be no hope that interest rates will rise; in fact quite the opposite. The Obama government is now saying "late 2015", 2 years away to start a return to market interest rates, not government compelled rates.

So in all of this, Canadian need to find their way. Some will take their annuity now as they want their income or realize that annuity give them a better returns than GICs or fear increasing stock market volatility.

Get Your Own Canadian Annuity Rate

To get your annuity rate, kindly complete our online annuity form.

GET AN ANNUITY QUOTE RIGHT NOW

Call 1-877-842-3863 today to get a free annuity quote.
We compare the best annuity rates in Canada! There is no cost or obligation and your privacy is guaranteed.