Let's start the conversation!
Get a free no obligation annuity quote.

Talk To A Broker

A qualified annuity broker can help design an annuity to fit your needs and can instantly provide quotes from all the leading annuity providers.

John and Linda from Ontario

Recently we were approached by a couple who were uncertain whether to buy an annuity now or later.

He is 65, works as a teacher at a technical academy and wants to retire now . His wife, also 65 works for a travel agent and sees no reason to give up working as she enjoys her lifestyle. She has her own small RRSP funds but it his RRSP amount of $250k approximately, about which they wanted to decide how to invest.

Their problem was similar to one often experienced by singles or couples in their age bracket. As a start they researched their options, discarding those that made them uneasy. They felt uncomfortable, she more so, in moving their money into a mutual fund. And they felt that segfunds, while guaranteed, offered no better answers. And neither mutual funds or segfunds, could guarantee a guaranteed return.

And the same reasoning applied to GIC's. Low interest rates, below both inflation and taxation levels, were also not attractive. They turned to perhaps buying and renting out a condo. Here again, unfamiliarity with the market and uncertainty over value, lead them to a dead end.

Finally they turned to annuities, a financial solution to give them each a guarantee of income that could not be outlived. And, as there is sufficient income now, they did not need to spend the extra money. Lifelong savers, they are not ready to splurge. And that is when they came to me to provide some insight into their thinking. Researching "life annuities," led them to my site where I offer quotes for comparison from all the companies.

But they needed more than just a comparison quote today; they needed to know what would be the result if they waited to use the income. So we ran two sets of quotes, both with the purchase date of May 1, 2016 but income start dates of June 1, 2016 and June 1, 2020. 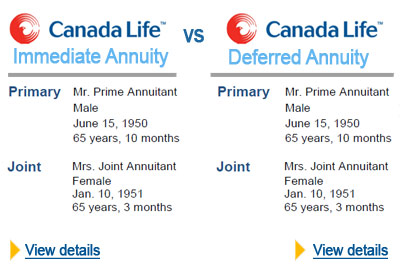 Wanting the income which is guaranteed for their lifetime but not wanting to use the income , they elected to take and save the payments. He will not pay a lot of income tax as he will retire, so most, if not all, can be saved.

And if that happens and his wife retires in 4 years as anticipated, they should have an extra lump sum of about $50k with which to start their retirement. They would received more income by waiting but they would be 84 years old before they received an equivalent amount of income. Their future health, though still good, played a part in this decision. You cannot compensate age with money.

Would you have made the same decision?

What John and Linda have to say:

In April, 2016, my wife and I purchased a Joint Life annuity with the assistance and guidance of LifeAnnuities.com - The Hughes Trustco Group Ltd. Ivon provided quotes from financial institutions and advice which guided us to the optimal insurance product for our needs. All documentation for the transaction was prepared by Ivon.

Speak to an Annuity Expert

You can customize your annuity to meet your needs by adjusting the guarantee period, indexing it to inflation or including your spouse in a joint policy. You can compare quotes from all the leading life insurance companies in Canada. Our clients get sound advice and excellent service with no fees to pay.

GET AN ANNUITY QUOTE RIGHT NOW

Get a free annuity quote today.
We compare the best annuity rates in Canada! There is no cost or obligation and your privacy is guaranteed.